Many people refer to food allergies when they probably have a food intolerance. A food intolerance can cause some of the same signs and symptoms as a food allergy, so people often confuse the two.  So what’s the difference between the two? In some cases, an allergic reaction to a food can be severe or life-threatening (anaphylaxis). In contrast, food intolerance symptoms are generally less serious and often limited to digestive problems. Food Alleries The main thing that defines a food allergy is that the body thinks one of the proteins in the food is harmful and thus triggers an immune response by producing histamine and usually pretty immediate. It becomes.

What Causes Dark Circles Under the Eyes 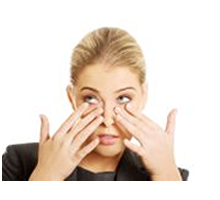 We all know that late nights and working too hard can contribute to dark circles under the eyes. So what is happening on the cellular level to this delicate skin around the eyes. Your skin below the eyes is very thin and can show the blood vessels and the blood contained therein. Ageing As we age and get older, our skin loses it’s elasticity and collegen production resulting in the skin becoming even more thinner. we lose subcutaneous fat which often masks the blueness just below the surface of the skin. This is why the elderly often appear to have very dark circles under their eyes. Sun Exposure More melanin.